WHAT TO DO IN DENIA 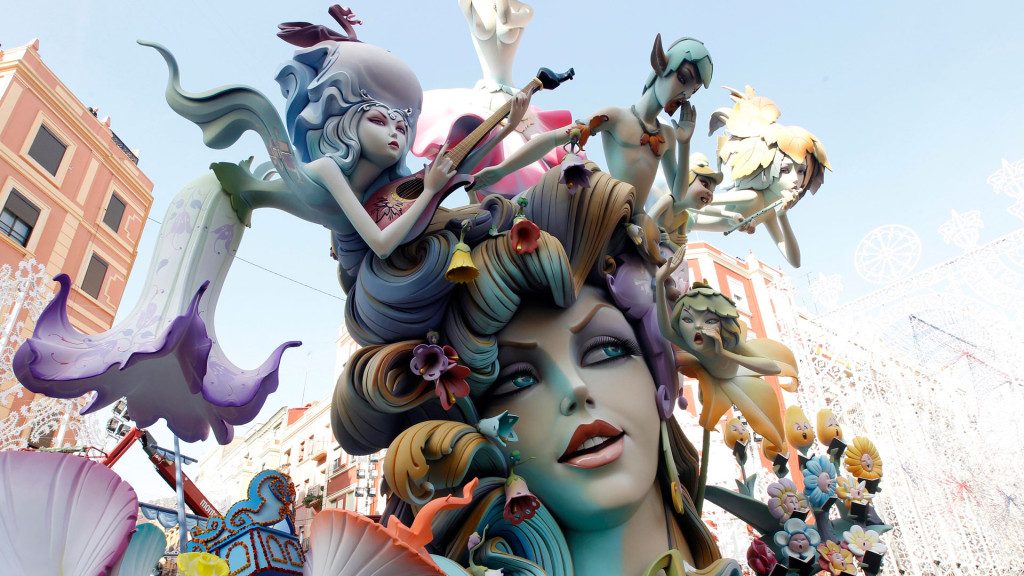 Las Fallas is a festival held between 15th to 19th March in various locations including Valencia and Denia, although falleros events begin on the last Sunday of February.

We also talk about “Falla” when we refer to “fallero monument” which is a figure several meters high made of high papier-mache, polyurethane or expanded polystyrene. Each Falla has an important significance. This is explained on signs in Valenciano.

It is a pyrotechnic show which is a noisy but rhythmic composition which is included in the celebrations of thousands of locations, especially at Fallas parties. Some mascletàs are musical because they imitate songs and explosions often go from strength to strength, achieving a spectacular finish.

Where did the tradition of mascletàs and firecrackers come from?

It is said that gunpowder was invented in China when the Taoists tried to create a potion for immortality. Then the Arabs brought it when they occupied the Iberian Peninsula in the early thirteenth century. In the late eighteenth century “els mascles” (males, in Castilian) firecrackers were thrown at the feet. The person who could handle the most firecrackers was the “most macho”

Then, began the tradition of tying these firecrackers with ropes and this evolved to the current “mascletà”. Do not miss the mascletàs during these Fallas in Dénia!

Check out our presentation with vocabulary and highlights of the Fallas in Denia:

Happy Fallas to everyone!

It was a very interesting experience! 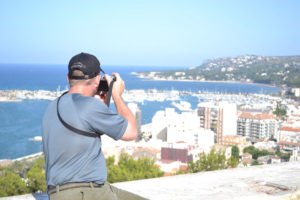 Learn Spanish while having fun: what to do in Dénia 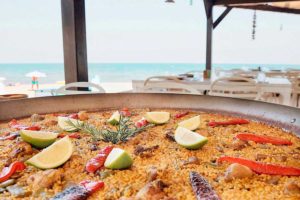 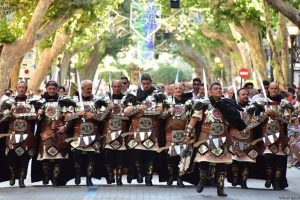 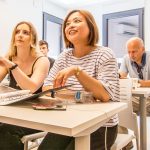 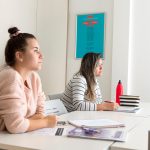 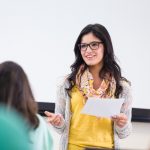 TLCdénia Languages
4.9
Based on 29 reviews

Cindy Bourne
22:18 04 Mar 20
My daughter has studied at TLC Denia many times, she loves it here. Santos and Patrica really care for the children... and look after them exceptionally well. I have been so happy with my daughters learning here, that last summer I joined her. Although I found learning anew language difficult it was great fun and everyone was so helpful. I highly recommend TLCread more

Irene Cauley
15:41 27 Feb 20
I attended the school in 2017, only for a week, which was just too short. Having said that I got a lot out of that... week as there were only 7 in our class, standard of teaching was high and the pizza making evening was great fun.read more

Anatoly Kondratenko
15:10 22 Feb 20
We have a home in Jávea and my level of Spanish was always OK for me until I encountered the need to negotiate with... companies in Spain and Latin America. This was the moment I first discovered TLC. Since then, every summer I spend several weeks (Mon - Fri) in the class where I choose the topics to learn as needed for my industry. My kids attend group classes. The entire family is now Spanish speaking! Except my lovely wife. :) I will have to place her in beginners class one day. What I like about the guys: they do their work openheartedly, accept you as a friend or family member. Their social programs are amazing in variety and content. And not too costly as they have good roots in Dénia.read more

Virve Roosimägi
11:18 21 Feb 20
The best language scool in Costa Blanca! I will definitely continue to study there, great teachers and good programs.

Camilla Haugrud
10:42 21 Feb 20
This is a really good school. I was there for only two weeks, but learned so much and got so much more used to the... sounds of the language. There were also a lot of fun activities to do, making the learning even more fun. The teachers fit their methods to what level each student was in, even in the set groups. I highly reccommend studying here! Visit the site for more information, it's worth it.read more

Leigh Morant
19:30 20 Feb 20
My (then 12 and 14 year old) children and I studied Spanish at TLC Denia for 2 weeks in July of 2018. I took the adult... 20 hour/week class and they did the junior/teenage summer program where they studied in the classroom and in the late afternoon they would go exploring with 2 monitors. Because of the age of my daughter (12 at the time) I was not required to but I did chose to tagalong on many of these excursions. We stayed with a host family. Overall this was a wonderful experience and we are repeating it again this summer. This is a very good school and it continues to improve with time. I am excited to see the new classrooms and courtyard they’ve added recently. We love Denia. It is the perfect summer seaside town...safe, small, friendly, and there is no need for a car. Everything is walkable or accessible by public buses. One thing to note language-wise is that most local people speak Valencian among themselves, not Castilian Spanish, but you will be learning Castilian Spanish at TLC. All levels of Spanish are offered. Be sure to speak up to your instructor if you feel the level is not quite right. I was moved up a level after my first week and I probably should have said something sooner. We chose to live with a family for the purpose of practicing Spanish. This was a great experience. Our Spanish mom was a wonderful host and we had many great conversations. We are looki Nd forward to staying with her again! I would recommend half board for adults so that you get out and explore the local cuisine...which is not to be missed! There are many incredibly exciting sites for the teenagers to explore with their program and they will create memories to last a lifetime. Don’t expect them to be overly supervised or coddled. I would NOT send teens who have special needs or ADHD on this program alone. They need to be somewhat self-advocating and street smart to navigate their way to and from school. They must also at times navigate the social nuances of interaction with the other teenage students from other countries that may be quite different than their own. TLC Denia has a special program in a very special place. I know of no other programs where an entire family if all ages and levels can be on vacation together and also learning Spanish.read more

Nils Kaehler
21:50 23 Jan 20
What a fantastic language school, I enjoyed 2 years of Spanish at the TLC and it was the first time I really liked to... go to school... great staff, great location, the best way to learn Spanish and have a great time!!read more

Eric Quinones
14:00 20 Dec 19
I took my 9 year-old daughter for Spanish language courses. She is a heritage speaker but needs a lot of... reinforcement. TLC Denia did a great job. The course was right for her skill level and her teacher was both fun and demanding. We also did the sailing component and, after some initial misgivings, my daughter really embraced it and wants to do it again. We recommend TLC Denia with great enthusiasm. One more thing: Denia is one gem of a town!read more

N Jamieson
15:56 23 Jul 19
Accredited by the Instituto Cervantes, TLCdenia is a great option if you are looking for a Spanish-language school... outside the big urban centres. The team is very friendly and professional, both in terms of the teaching and support outside the classroom. The centre itself is very modern (with good aircon) and the teachers make use of different media to make the learning experience more engaging. Denia itself is quite laid back and has a large selection of restaurants. Attended in July 2019.read more

Lawrence Horwitz
03:41 24 Aug 18
This family run school has people who genuinely care about the program and its mission. Two generations work together... to make this school a well-run school - excellent teachers, outstanding administrators, and tons of personal care and attention. A real gem.read more

Courtney Horwitz
02:33 24 Aug 18
I can't say enough good things about TLCDenia. Maria, Santos, Alex, all of the staff and all of the teachers are... excellent. First, the teaching was superb. My husband, 5 year old daughter, and I all attended the family language camp for two weeks. Our Spanish improved and we had so much fun learning. The class my husband and I were in was relaxed, lots of fun conversations with classmates and the teachers but also serious about teaching. The teachers were all very skilled and pleasant to be with. My 5 year old was in the younger kids camp and she loved it. The teachers were young and energetic and they went on fun adventures around town each afternoon. The school's facilities are excellent-comfortable, good wifi, air conditioning, etc. And they are located right in the center of town. But TLC Denia offers so much more than language classes. Every afternoon/evening there was an activity organized by the school that we could participate in, for free! We all went to a salsa dancing lesson one afternoon. We went to the fish market and learned about the fish auction another afternoon, we went to a paella cooking demo and of course eating at the owner's mothers' house. All of the kids went swimming while we drank sangria and learned how to make paella, we went to the public market and then went out for tapas. During all of these activities, our TLCDenia guide spoke to us in Spanish. These afternoon and evening excursions really added to our experience. And there is more, we rented an apartment on the beach through TLCDenia. It was less expensive than anything I found on airbnb. And it was terrific. It was across the street from the beach and in front of a pool. We were in the water, everyday! We had a little outdoor patio overlooking the pool, where we ate dinner. The apartment was clean, nicely furnished and had every amenity we could desire-including beach chairs, floats for the water, a stocked kitchen, washer and dryer, dishwasher, etc. And there is still more, TLCDenia is run by a family and they make you feel like you are part of their family. They took loving care of us while we were in Denia. We had our 2 year old son with us as well. TLCDenia found a daycare for him to go to while we were at our Spanish language class. They told us what bus to take from the apartment to school and at what time to catch it so we'd have time to drop off our 2 year old and get to class on time. They showed us around the apartment when we arrived, they drove us back to our apartment after the paella cooking demo as it was a long walk for our children. And I'm still not done, I would be remiss if I didn't mention how magical the city of Denia is. It has everything you could want in a vacation city, a bustling harbor that brings in fresh fish to the restaurants and fish market, beautiful, endless beaches, mountains with a castle on top, and in the middle of all of this is a quaint town with many pedestrian only streets and delicious restaurants. You should buy your ticket today to fly to Denia and go to TLC Denia language school. You won't be disappointed. Thank you Maria, Santos and Alex for everything!read more

Alex Doldan Timor
12:35 10 Nov 15
TLCdénia is a family-run boutique Spanish school, an ideal place to learn the language and have a great experience.... Teachers are very nice and highly qualified. Personalized attention, cleanness and flexibility are some of the characteristics of the school.read more
Next Reviews
[miniorange_social_login shape="longbuttonwithtext" theme="default" space="4" width="240" height="40"]

We use cookies to ensure that we give you the best experience on our website. If you continue to use this site we will assume that you are happy with it.Ok